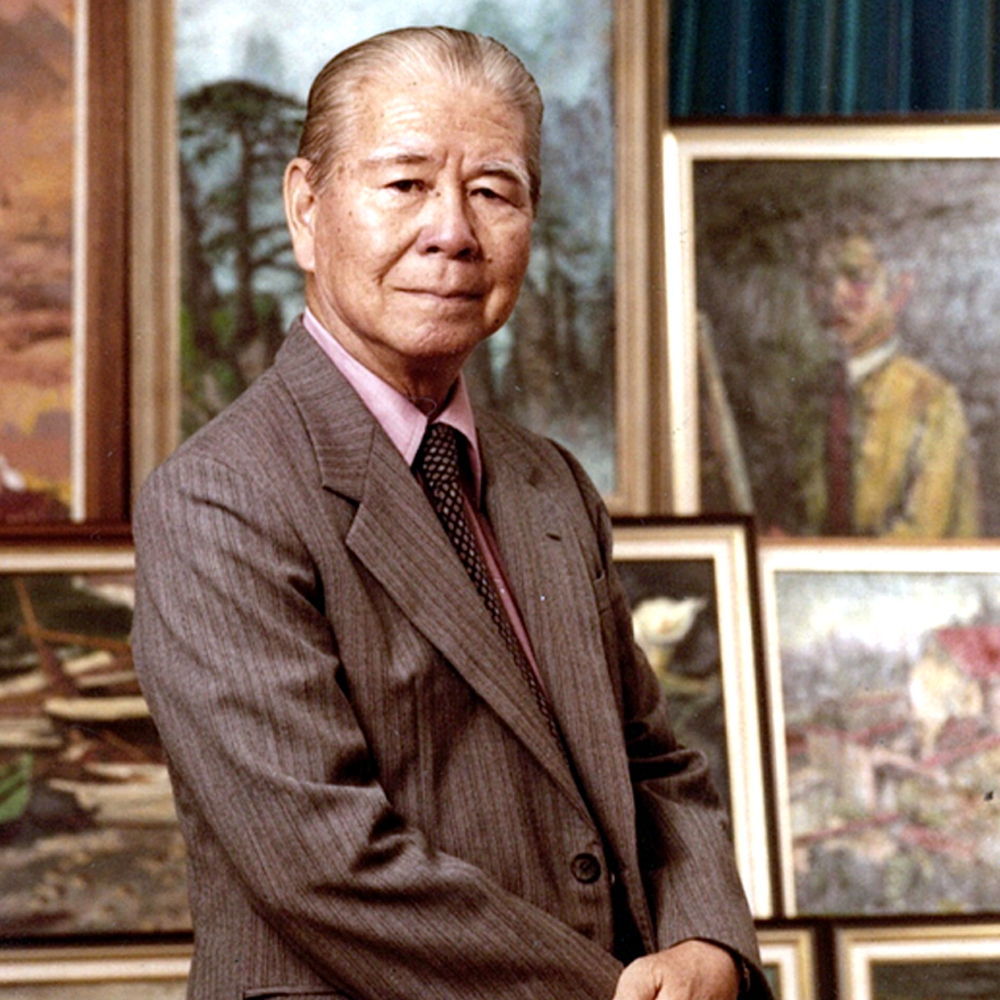 Liu Kang is recognised as one of Singapore’s most influential pioneering first-generation artists. He is best known for his contributions to the Nanyang painting style, which he developed together with his contemporaries after a field trip to Bali in 1952. Many arts scholars have identified the Bali trip as a milestone event contributing to the birth of the Nanyang art style, marking an important juncture in Singapore’s art history. He had also greatly contributed to the development of art in Singapore. He was a leading figure in the Society of Chinese Artist and the Singapore Art Society, and received the Public Service Star award in 1970, and the Meritorious Service medal in 1996.

Liu received his art education from the best of both hemispheres. Translated these influences and incorporated local Southeast Asian flavours into his work to create the distinct Nanyang style. Attributed to Singapore’s pioneer artists – Chen Wen Hsi, Chen Chong Swee, Cheong Soo Pieng and Liu Kang, the Nanyang style of art first emerged after the four pioneer artists’ return from a study-cum-painting trip in Bali in 1952.

Liu Kang is a prolific artist and painter. His oeuvre of works is extensive and includes oil painting, pastel, Chinese ink painting, and calligraphy. Over Liu’s lifetime, he had been exhibited in Singapore and overseas including France, Hong Kong, Macau, Taiwan and the United States.

1917–1926: His childhood years were spent in Muar, Malaya.
1926–1928: He enrolled in the Xinhua Art Academy, Shanghai, China.
1928–1933: His continued his art studies at the Académie de la Grande Chaumière in Paris.
1933–1937: He became a professor of western painting at Shanghai College of Fine Arts.
1937: Weds Chen Jen Pen in Shanghai.
1937–1945: The couple moved to Muar when the Japanese invaded Shanghai. The couple then arrived in Singapore, where Liu teaches art at Nan Chiao Teachers’ Trainnig College Singapore and Chung Cheng High School. Japanese forces attacked Singapore. Thus they returned to Muar, where Liu opened a coffeeshop with his brother. They go back to Singapore to escape Japanese persecution
1946: He released his multivolume illustrated work, Chop Suey, on the atrocities during the Japanese Occupation.
1957: He held his first solo exhibition in Singapore.
1968: He became the founding member of the Singapore Art Society and became its president for 10 consecutive years.
1981: One of his largest local exhibition, Liu Kang Retrospective, was held at the National Museum Singapore. Over 200 artworks were displayed
1983: Liu Kang Exhibition Tour in Taipei, Kaohsiung, Taichung and Tainan in Taiwan.
1989: Paintings by Liu Kang exhibition was held at the National Museum Art Gallery
1997: Liu Kang at 87 exhibition was held at the Singapore Art Museum.
1998: Liu Kang at 88 exhibition was held at the Singapore Soka Association where 72 works of his family members were included.
2000:  His first solo exhibition in Beijing, China
2003: Liu Kang donated all his works to the Singapore Art Museum. Over 1000 works were donated.
2004: Liu Kang passes away of natural causes.