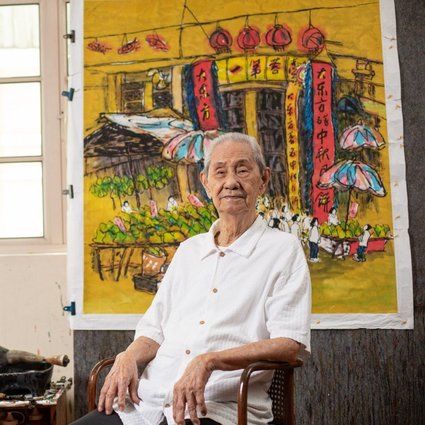 On September 28, 1921, Lim Tze Peng, a second-generation Nanyang style artist, was born in Singapore. His bright Chinese ink drawings of ancient Singapore, particularly of old Malay kampongs, Chinatown, and the Singapore River, are his most well-known works. Over the course of his six-decade career as an artist, the ex-schoolteacher and self-taught artist has created a vast body of work that includes oil, Chinese ink, and, most recently, reimagined calligraphic paintings that show the artist’s progression from realism to ferocious expressionism, all while painting an evocative and delicate tale of Singapore’s past as seen by the common man. In 2003, he received the Cultural Medallion for his contributions to the visual arts in Singapore.

Lim Tze Peng taught himself to paint as a child. Since he was passionate about his hobby, he painted still lifes in watercolours and oils. In 1949, he graduated from Chung Cheng High School and went on to teach at Sin Min School, a primary school in Pasir Ris at the time. In 1951, he became the principal of Sin Min School, where he stayed until 1981, when he retired. Lim was a committed student who spent his academic career pursuing his passion for painting.