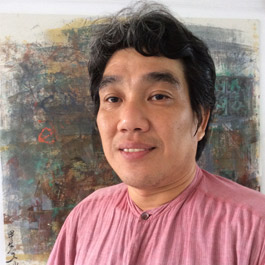 Anthony Chua Say Hua, who was born in Singapore in 1966, has been immersed in different cultures through his journey as an artist. He received a Diploma in Fine Arts from Nanyang Academy of Fine Arts in 1989-92, and continued his art study at the Royal Melbourne Institute of Technology in Australia (1993-94) and Goldsmiths College in London (1996-97). In addition, he completed an art fellowship at Vermont Studio Center in Johnson, USA.

As he masterfully mixes the best of the two cultures, his distinctive contemporary Chinese ink paintings are informed by Western Modernist aesthetics while employing the logic and philosophy of traditional Chinese ink painting technique. Chua Say Hua is a versatile artist who is adventurous in his expression in art, he has dabbled with the effects of smearing, rubbing, and layering ink to build on the unique intricacies of ink wash on rice paper, in addition to playing with diverse compositional themes. In his paintings, the artist is recognized for using a variety of brushes and unusual instruments such as peacock feathers and squeeze bottles.

He has won various awards in competitions over the years. In 2001, he got the National Arts Council’s Young Artist Award, and in 2014, he won an award at the established artist category in the 33rd UOB Painting of the Year Competition.

Anthony Chua Say Hua was largely influenced creatively by the 1980s growing up. The generation of artists that grew up in, and were inspired by, the 1980s was influenced by a period of rapidly growing global capitalism, political upheaval, significant wealth discrepancy, global mass media and distinctive music and fashion, including electronic pop music and hip hop.