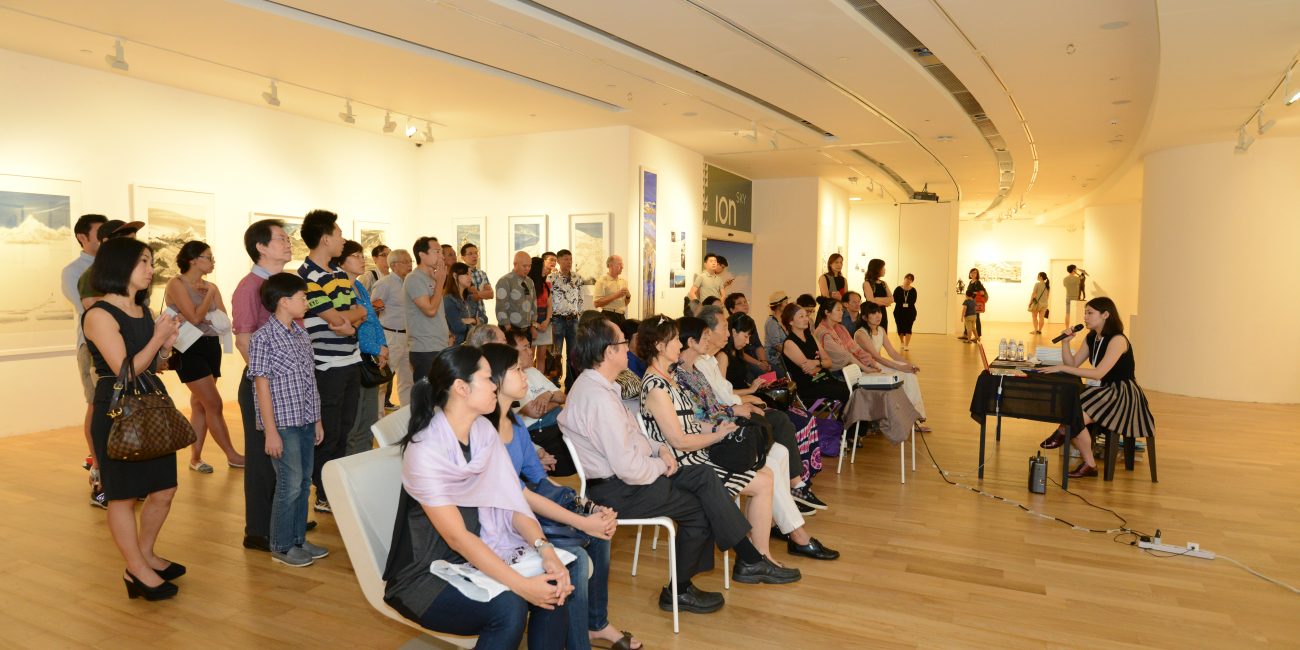 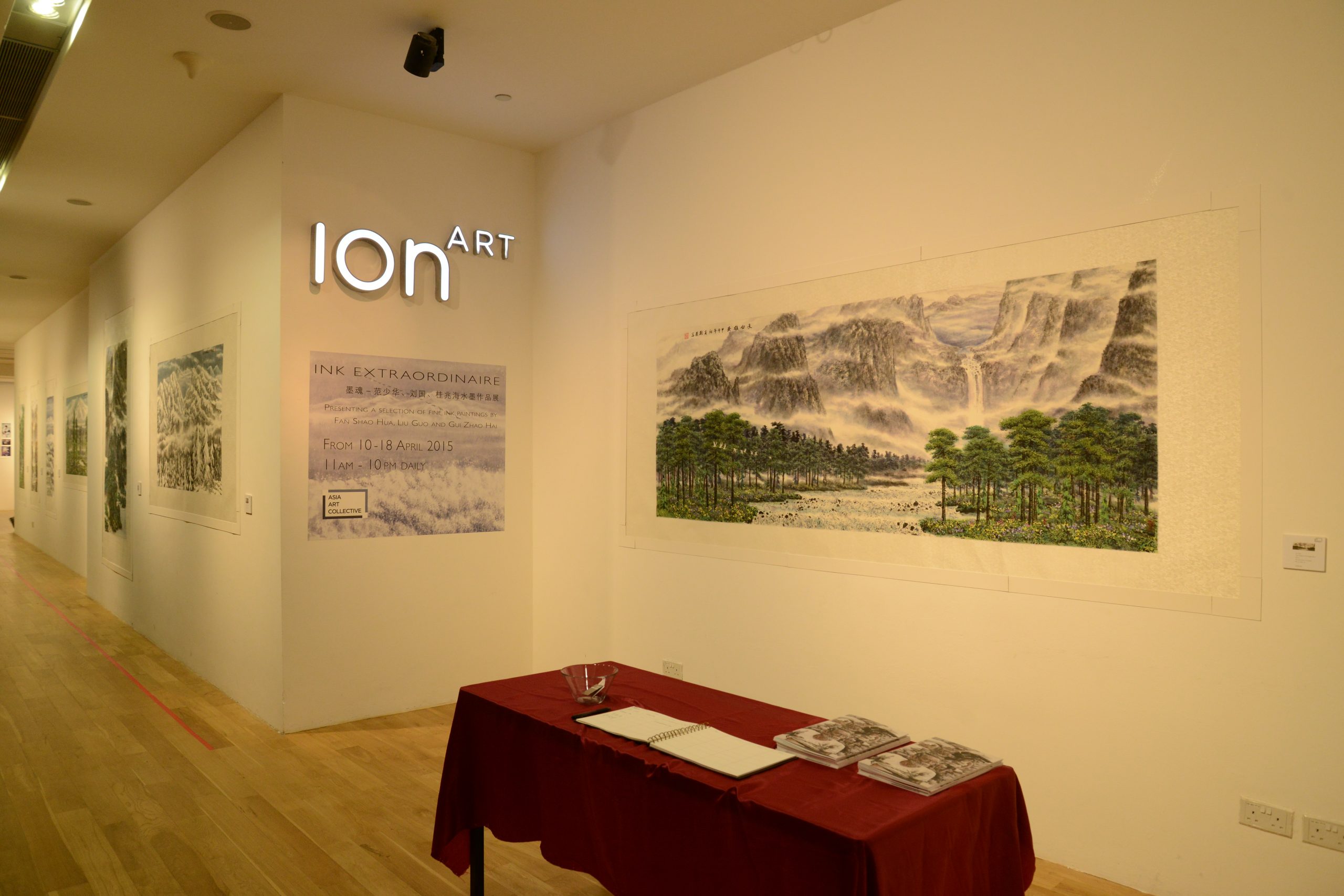 Fan Shao Hua (b. 1963 Guangzhou, China) is an artist based in Singapore since 1992. Fan started to learn ink painting at the age of ten, under the Guangdong master Lu Yanguang and studied both Western and Chinese painting since he was in secondary school. Fan graduated from the Guangzhou Academy of Fine Arts in China in 1985, and first began his career as an art teacher in the university. Fan migrated to Singapore in 1992, where he developed his career as a full-time artist. Being taught the foundation of both Chinese ink and Western oil painting, Fan has a deep understanding of both mediums, and has developed a unique style in his painting.

During the first few years of his relocation to Singapore, he was inquisitive of the new environment before him, and grew a strong interest and sensitivity to the local sights and sounds before him. With a keen observation, Fan captures familiar scenes and personalities of our neighbourhood and presents skillfully with his ink and brush. Portraying an aged lady self-absorbed in her daily chores as a vegetable seller, the artist creates unique frames out of common scenes of people and places open to our interpretation.

Understanding Singapore’s recent history and inspired by stories of her nation-building and struggles, Fan was empathetic to the hardship faced by Singapore’s early settlers – the Samsui woman and coolies. Fan visited the Samsui woman in their hometown in Lanshui, Guangdong, and painted their portraits. The moments of hardship, struggle and dignity can be seen in these faces, a testament to the artist’s skill and observation. Recognised for his ability in the genres of social realism and portraiture, Fan has a talent for capturing not only the likeness, but also the inner character and spirit of his subject. 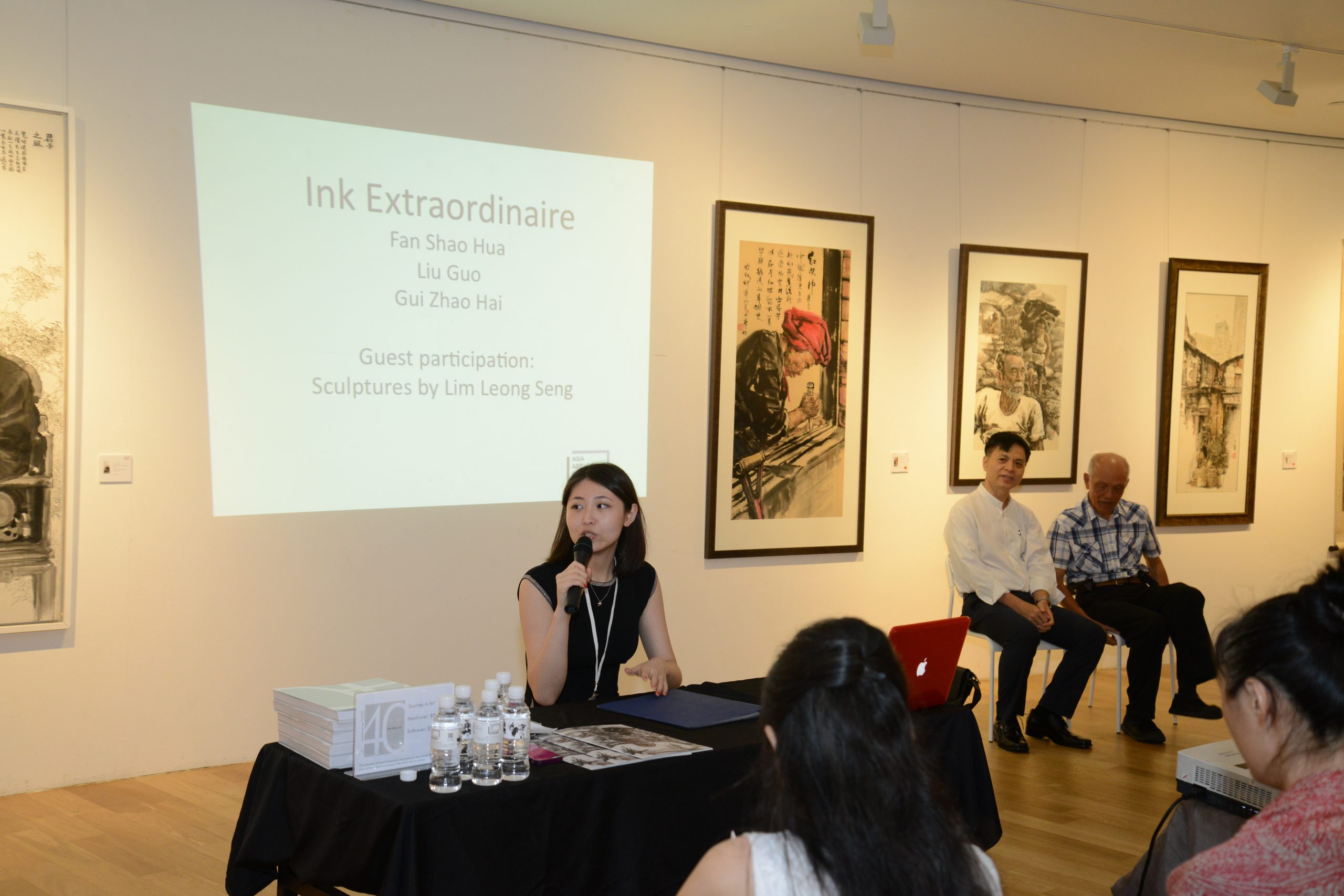 INK EXTRAORDINAIRE presents the debut of a whole series of Fan Shao Hua’s social realist ink works from the nineties. His street scenes bring to life the moments of both old and new Singapore, through his use of perspective, light and depth. The use of detail adds another layer of narrative, preserving the stories of Singapore’s development and progress. Fan Shao Hua won the First Prize in the 19th UOB Painting of the Year Award Competition in 2000, and is the first Singaporean artist to exhibit in all three major museums in China, at the National Art Museum of China, Shanghai Art Museum and the Guangdong Museum of Art.

Liu Guo (b. 1956, Jilin Province, China) graduated from the Department of Fine Art at Northeast Normal University, majoring in Chinese landscape painting, and further schooled in the Zhejiang Academy of Art (now known as China Academy of Art) in Chinese landscape painting, where he was taught under the most acclaimed 20th century Chinese ink masters Lu Yanshao, Liu Haisu, Sha Menghai, Wu Zuoren and others. Liu currently heads the Department of Fine Art at the Jilin Institute of Education and is the founder of the Changbaishan Art Academy, in addition to his numerous academic and honourary positions. Liu had contributed to the teaching of Chinese ink painting through a unique set of twelve techniques of ink and colour painting. In 1991, he completed a 60 metre scroll painting, ‘The Majesty of Mt. Changbaishan’, winning praise in China and abroad, establishing himself as an eminent contemporary ink painter.

Hailing from the rugged and cold landscape of Northeastern China, Liu imbues in his landscape paintings a sense of sublime beauty, where the vastness of nature co-exist with all living things, great and small. Liu is adept in representing snow in all its conditions with great sensitivity, a result of his lifetime of immersion and his unique technique of “leaving white”, allowing the paper to shimmer with light. Showcased in this exhibition are his recent works which touches on the splendour and beauty of nature. 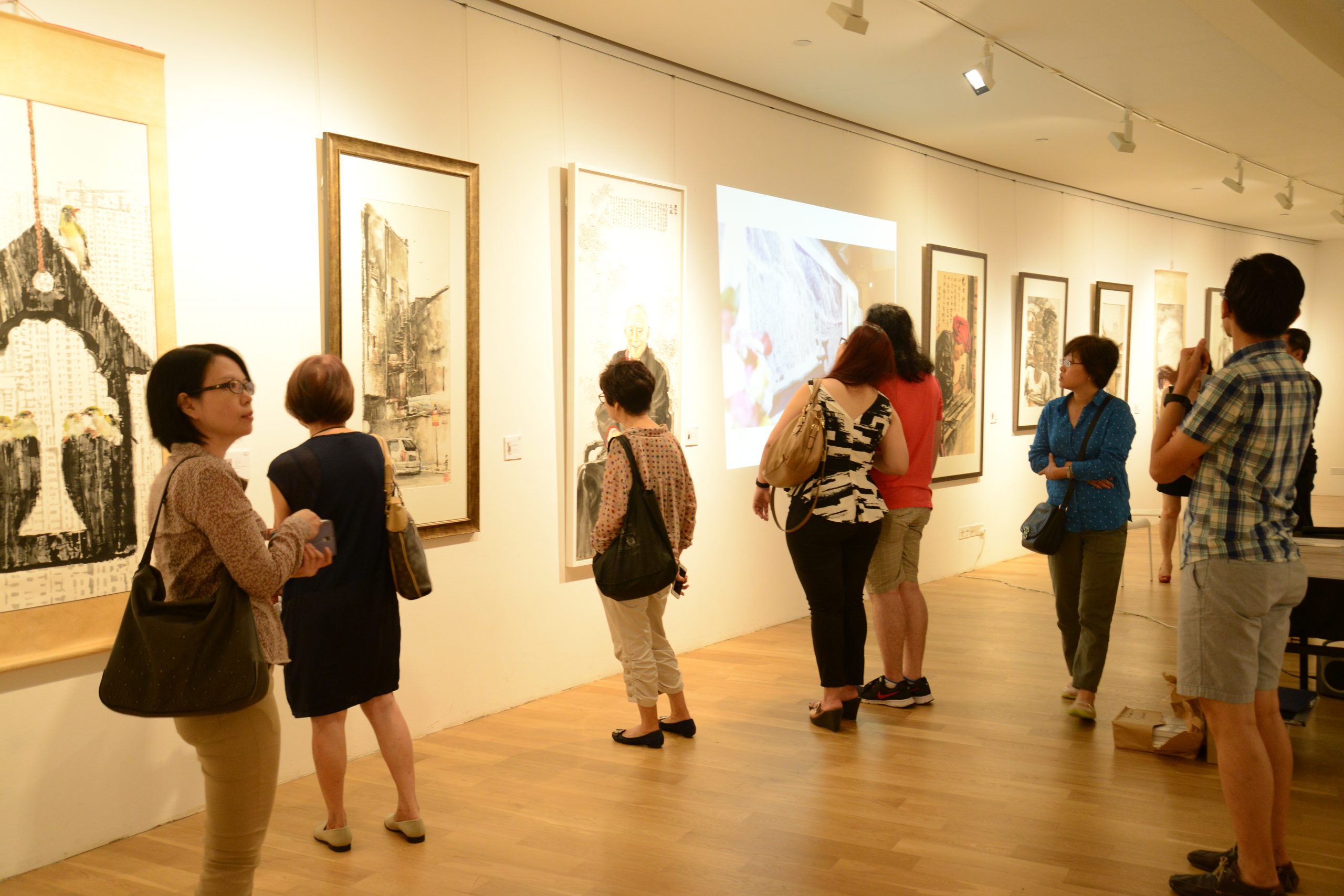 Gui Zhao Hai (b.1974, Anhui, China) is an artist and calligrapher residing in Beijing. He graduated from the Beijing Fine Art Academy in 2010 where he studied under Li Xiaoke, and in a special landscape class led by Jia Youfu at the Central Academy of Fine Arts, Beijing. Gui’s practice can be framed within the lineage of a Chinese modern art movement going back to the renowned 20th century artist Li Keran (1907-1989), a movement which incorporated elements of Western art practice such as the direct study of landscape from life, as opposed to repetition of classical Chinese landscape forms.

Drawing inspiration from the desolate and mountainous regions of Sichuan, Gui Zhao Hai’s works can be described as a force of nature in itself. The majesty of towering mountains to the deathly silence of a moonlit night in the highlands – his works are visual poetry and representation grounded in the experience of life.

Gui’s paintings have been winning awards in national art competitions in China. Most recently, in 2014,  ‘The Moon before me’ was selected out of numerous painting submissions to be showcased in the ‘Spirit of Beihong’ National Chinese painting exhibition held in Jiangsu, China, organised by the China Artists Association. 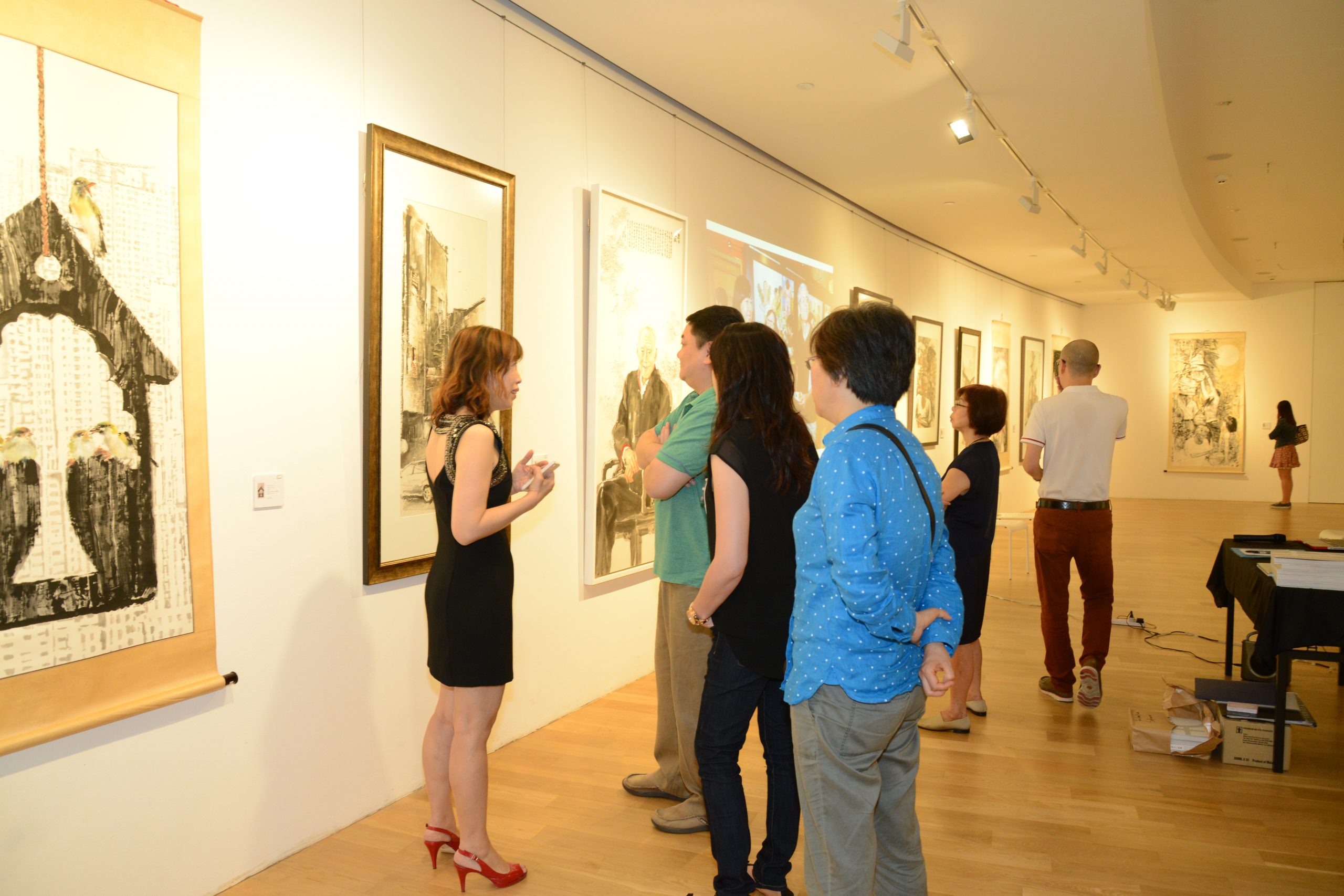 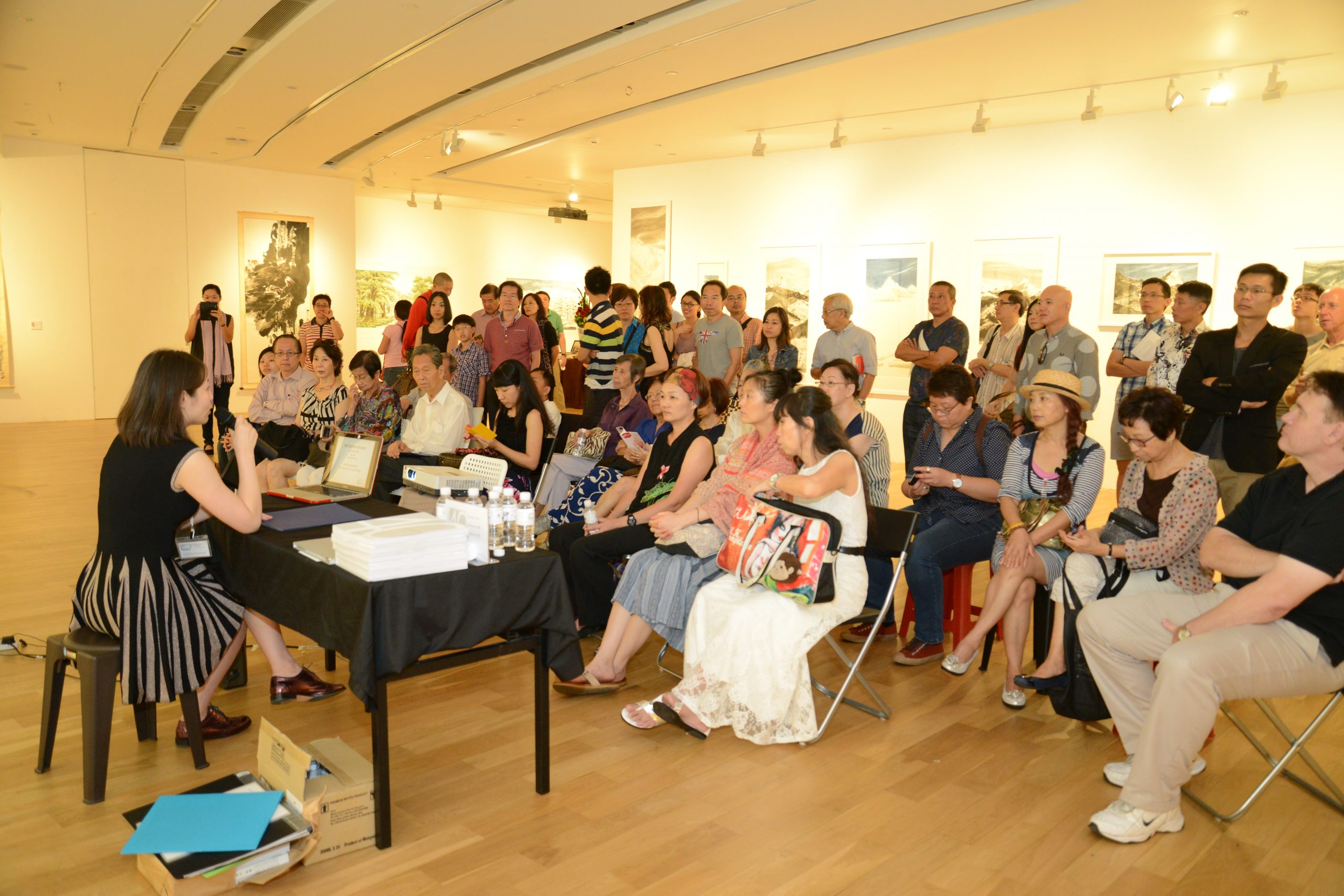 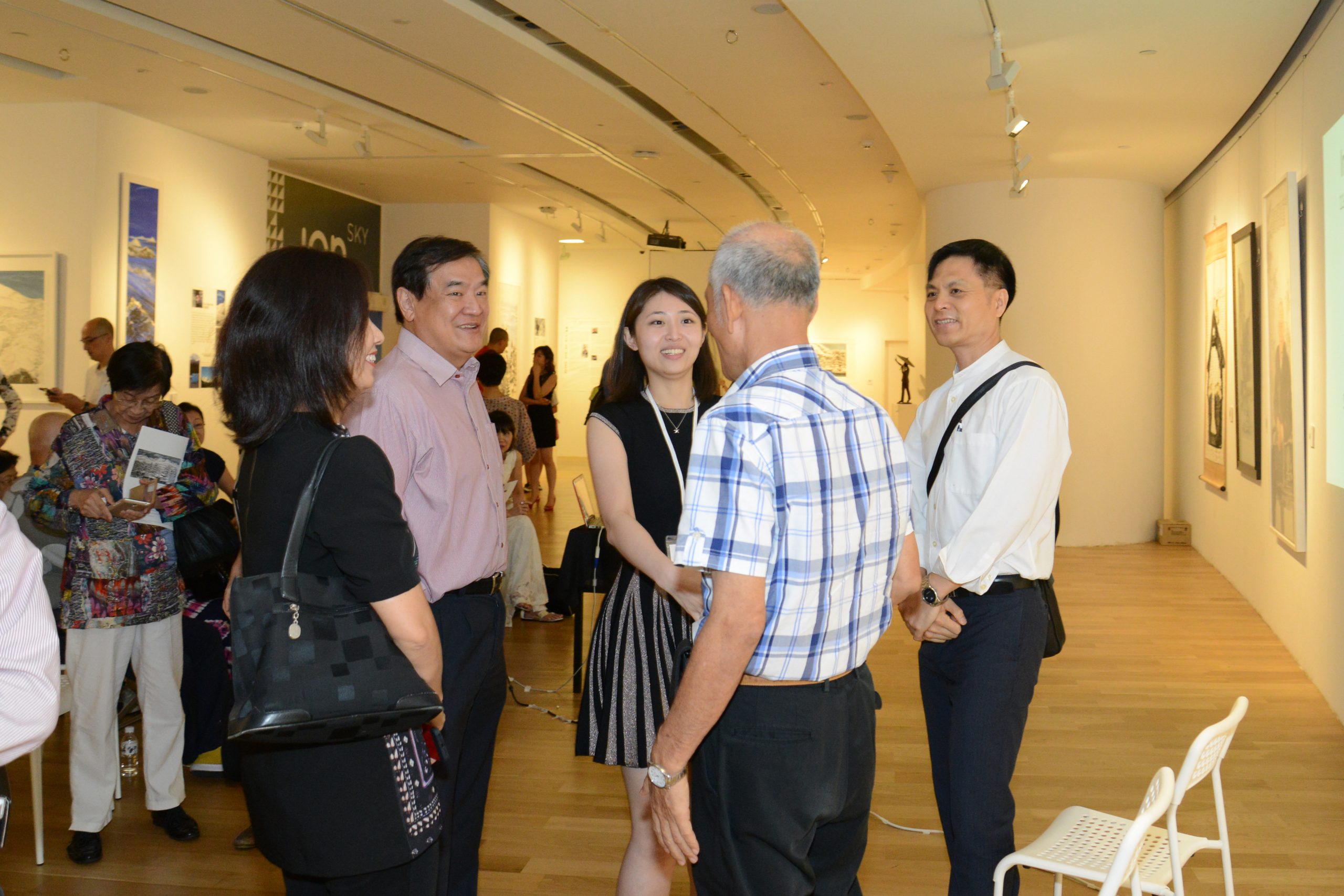